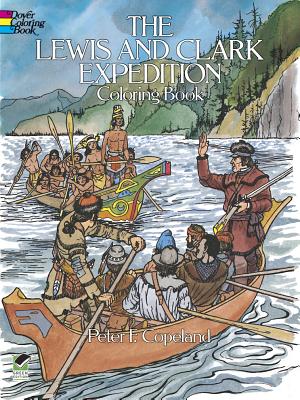 On April 30, 1803, the Louisiana Purchase Agreement between France and the United States was formally signed. President Thomas Jefferson paid the French emperor Napoleon Bonaparte approximately 18 cents per square mile for a vast wilderness territory (more than 825,000 square miles) stretching from New Orleans to the Canadian border and west from the Mississippi River to the Rocky Mountains. The Purchase effectively doubled the size of the young United States.
On May 14, 1804, Captains Meriwether Lewis and William Clark -- accompanied by an intrepid band of skilled hunters, carpenters, gunsmiths, and blacksmiths -- sailed up the Missouri River with a small fleet of three vessels. For the next two years, this dauntless team navigated insect- and snake-infested waterways, crossed scorching plains, scaled frigid mountain passes, battled hostile Indians, and faced near-starvation--all the while charting a vast wilderness never before glimpsed by white men.
By the time of their return to civilization in September of 1806, Lewis and Clark had brought back a large collection of important scientific information, opened the unknown East to American exploration and settlement, and added credibility to the U.S. claim to the Oregon Territory. Distinguished artist Peter F. Copeland recaptures the high points of this mighty expedition. Forty-five historically accurate, precisely drawn illustrations for coloring retrace the nearly 8,000 miles of the perilous trek. Captions identify the action in each plate, provide background information, and link the plates in a continuous and informative narrative.