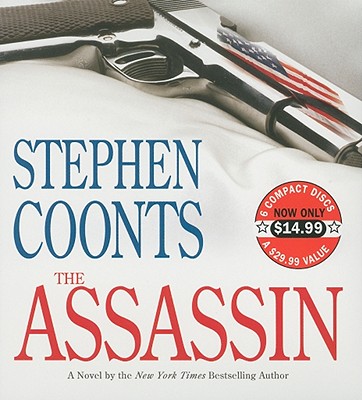 The Assassin: A Novel (Tommy Carmellini)

From Stephen Coonts comes a novel of high octane excitement, featuring Tommy Carmellini in his most dangerous mission yet.
In the finale of Coonts's last novel "The Traitor," the ruthless and brilliant Al Qaeda leader who nearly succeeded in blowing up a meeting of the Group of 7 in Paris slipped the noose and escaped. But Abu Qasim has another trick up his sleeve: he has offered to pay a the Mafia a fortune to help him bring New York to its knees.
The CIA learns that something is up and a worried president sends his best--Jake Grafton and his secret weapon, Tommy Carmellini. Tommy is soon in grave danger as he tries to piece the deadly puzzle together. Set amidst ticking bombs and flying bullets, the stakes have never been higher. Will Tommy put it all together in time t stop the disaster? Or will the terrorists set events in motion that will leave America reeling?

The Assassin: A Novel (Tommy Carmellini)