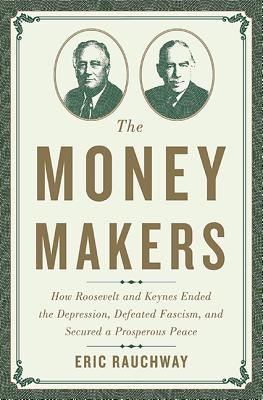 The Money Makers: How Roosevelt and Keynes Ended the Depression, Defeated Fascism, and Secured a Prosperous Peace

Shortly after arriving in the White House in early 1933, Franklin Roosevelt took the United States off the gold standard. His opponents thought his decision unwise at best, and ruinous at worst. But they could not have been more wrong.

With The Money Makers, Eric Rauchway tells the absorbing story of how FDR and his advisors pulled the levers of monetary policy to save the domestic economy and propel the United States to unprecedented prosperity and superpower status. Drawing on the ideas of the brilliant British economist John Maynard Keynes, among others, Roosevelt created the conditions for recovery from the Great Depression, deploying economic policy to fight the biggest threat then facing the nation: deflation. Throughout the 1930s, he also had one eye on the increasingly dire situation in Europe. In order to defeat Hitler, Roosevelt turned again to monetary policy, sending dollars abroad to prop up the faltering economies of Britain and, beginning in 1941, the Soviet Union. FDR's fight against economic depression and his fight against fascism were indistinguishable. As Rauchway writes, "Roosevelt wanted to ensure more than business recovery; he wanted to restore American economic and moral strength so the US could defend civilization itself." The economic and military alliance he created proved unbeatable-and also provided the foundation for decades of postwar prosperity. Indeed, Rauchway argues that Roosevelt's greatest legacy was his monetary policy. Even today, the "Roosevelt dollar" remains both the symbol and the catalyst of America's vast economic power. The Money Makers restores the Roosevelt dollar to its central place in our understanding of FDR, the New Deal, and the economic history of twentieth-century America. We forget this history at our own peril. In revealing the roots of our postwar prosperity, Rauchway shows how we can recapture the abundance of that period in our own.

Title: The Money Makers: How Roosevelt and Keynes Ended the Depression, Defeated Fascism, and Secured a Prosperous Peace

The Money Makers: How Roosevelt and Keynes Ended the Depression, Defeated Fascism, and Secured a Prosperous Peace