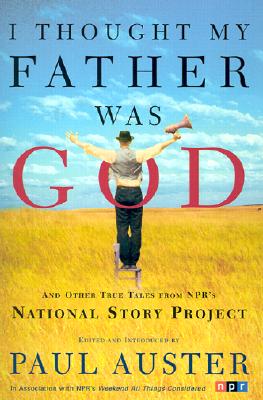 I Thought My Father Was God: And Other True Tales from NPR's National Story Project

One of America's foremost writers collects the best stories submitted to NPR's popular monthly show--and illuminates the powerful role storytelling plays in all our lives
When Paul Auster and NPR's Weekend All Things Considered introduced The National Story Project, the response was overwhelming. Not only was the monthly show a critical success, but the volume of submissions was astounding. Letters, emails, faxes poured in on a daily basis- more than 4,000 of them by the time the project celebrated its first birthday. Everyone, it seemed, had a story to tell.
"I Thought Mmy Father Wwas God" gathers 180 of these personal, true-life accounts in a single, powerful volume. They come from people of all ages, backgrounds, and walks of life. Half of the contributors are men; half are women. They live in cities, suburbs, and rural areas, and they come from 42 different states. Most of the stories are short, vivid bits of narrative, combining the ordinary and the extraordinary, and most describe a single incident in the writer's life. Some are funny, like the story of how a Ku Klux Klan member's beloved dog rushed out into the street during the annual KKK parade and unmasked his owner as the whole town looked on. Some are mysterious, like the story of a woman who watched a white chicken walk purposefully down a street in Portland, Oregon, hop up some porch steps, knock on the door-and calmly enter the house. Many involve the closing of a loop, like the one about the woman who lost her mother's ashes in a burglary and recovered them five years later from the mortuary of a local church.
Hilarious blunders, wrenching coincidences, brushes with death, miraculous encounters, improbable ironies, premonitions, sorrows, pains, dreams-this singular collection encompasses an extraordinary range of settings, time periods, and subjects. A testament to the important role storytelling plays in all our lives, "I Thought My Father Was God" offers a rare glimpse into the American soul.

Title: I Thought My Father Was God: And Other True Tales from NPR's National Story Project

I Thought My Father Was God: And Other True Tales from NPR's National Story Project