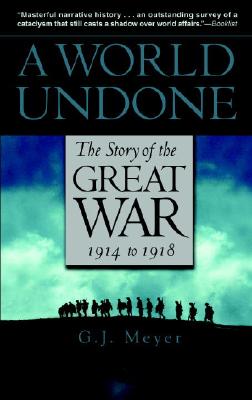 Drawing on exhaustive research, this remarkable, intimate account tells the story of how World War I reduced Europe's mightiest empires to rubble, killed twenty million people, and cracked the foundations of the world we live in today.

On a summer day in 1914, a nineteen-year-old Serbian nationalist gunned down Archduke Franz Ferdinand in Sarajevo. While the world slumbered, monumental forces were shaken. In less than a month, a combination of ambition, deceit, fear, jealousy, missed opportunities, and miscalculation sent Austro-Hungarian troops marching into Serbia, German troops streaming toward Paris, and a vast Russian army into war, with England as its ally. As crowds cheered their armies on, no one could guess what lay ahead in the First World War: four long years of slaughter, physical and moral exhaustion, and the near collapse of a civilization that until 1914 had dominated the globe.

Praise for A World Undone "Thundering, magnificent . . . A World Undone] is a book of true greatness that prompts moments of sheer joy and pleasure. . . . It will earn generations of admirers."--The Washington Times "Meyer's sketches of the British Cabinet, the Russian Empire, the aging Austro-Hungarian Empire . . . are lifelike and plausible. His account of the tragic folly of Gallipoli is masterful. . . . A World Undone] has an instructive value that can scarcely be measured"--Los Angeles Times "An original and very readable account of one of the most significant and often misunderstood events of the last century."--Steve Gillon, resident historian, The History Channel