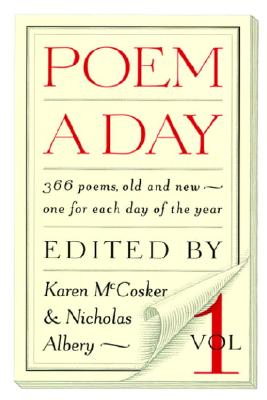 Once upon a time men and women of sense and sensibility knew by heart dozens of poems - Shakespeare's sonnets, stirring patriotic verse, odes to churchyards and elegies for the departed, the music of Swinburne or Poe or Yeats. Poems are meant to be voiced and A Poem a Day includes 366 poems old and new - one for each day of the year - worth learning by heart. Only two criteria were demanded of each poem for inclusion in this collection - it had to be short enough to learn in a day, and good enough to stand among the great poetry of the English language, from Chaucer to Sylvia Plath.

A Poem a Day is a book for the bedside. It contains many of the most familiar poems in the language and others that will come as a surprise. Most are complete and most are short, easily contained in a single page. But a few are substantial works, like Thomas Gray's "Elegy Written in a Country Churchyard" and Rudyard Kipling's "Gunga Din." Some have been read by every high school student (Andrew Marvel, "To His Coy Mistress") while others will be new to most readers (Thomas Hardy, "The Voice"). But all share the compression and charged meaning which are the soul of poetry. In its British version the book went through seven printings in a year and was a bestseller. Now Karen McCosker has added a new foreword and fifty new poems for an American audience willing to make poetry a part of life.