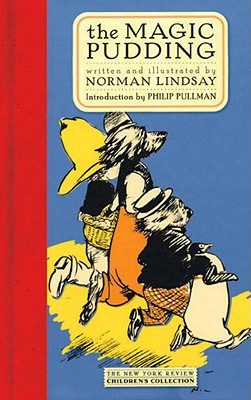 The Magic Pudding is a pie, except when it's something else, like a steak, or a jam donut, or an apple dumpling, or whatever its owner wants it to be. And it never runs out. No matter how many slices you cut, there's always something left over. It's magic.

But the Magic Pudding is also alive. It walks and it talks and it's got a personality like no other. A meaner, sulkier, snider, snarlinger Pudding you've never met. So Bunyip Bluegum (the koala bear) finds out when he joins Barnacle Bill (the sailor) and Sam Sawnoff (the penguin bold) as members of the Noble Society of Pudding Owners, whose "members are required to wander along the roads, indulgin' in conversation, song and story, and eatin' at regular intervals from the Pudding." Wild and woolly, funny and outrageously fun, The Magic Pudding stands somewhere between Alice in Wonderland and The Stinky Cheese Man as one of the craziest books ever written for young readers.