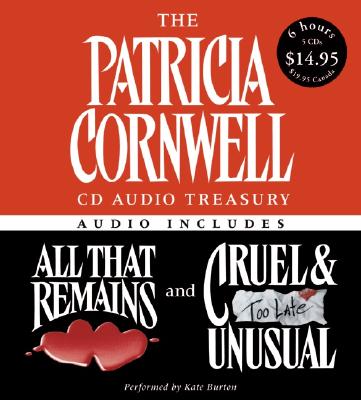 Two great Patricia Cornwell audio titles for the price of one. All that Remains and Cruel and Unusual.

A serial killer is loose in Richmond, specializing in attractive young couples whose bodies are invariably found in the woods months later -- minus their shoes and socks. Chief Medical Officer Dr. Kay Scarpetta finds herself tracking a killer who scrupulously eliminates every clue, rendering all her

forensic skills useless. This time it's her courage and intuition on the line in a race against time.

When convicted killer Ronnie Joe Waddell is executed in Virginia's electric chair, he becomes what should be a routine case for Chief Medical Examiner Kay Scarpetta. But after Waddell's execution, everyone connected to him begins to die - including a member of Scarpetta's staff. When crucial records disappear from her files, Scarpetta comes under fire for incomeptence. Caught in a web of political intrigue, she must fight to free herself from murderous insinuations and threats to her own life. She soon finds herself retracing Waddell's bloody footprints, following a trail that might lead to long-hidden secrets deep within the state government. Either the truth will set her free - or unleash upon her a punishment both cruel and unusual.