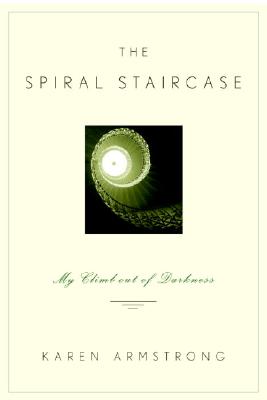 The Spiral Staircase: My Climb Out of Darkness

Karen Armstrong begins this spellbinding story of her spiritual journey with her departure in 1969 from the Roman Catholic convent she had entered seven years before--hoping, but ultimately failing, to find God. She knew almost nothing of the changed world to which she was returning, and she was tormented by panic attacks and inexplicable seizures.
Armstrong's struggle against despair was further fueled by a string of discouragements--failed spirituality, doctorate, and jobs; fruitless dealings with psychiatrists. Finally, in 1976, she was diagnosed with epilepsy, given proper treatment, and released from her "private hell." She then began the writing career that would become her true calling, and as she focused on the sacred texts of Judaism, Christianity, and Islam, her own inner story began to emerge. Without realizing it, she had embarked on a spiritual quest, and through it she would eventually experience moments of transcendence--the profound fulfillment that she had not found in long hours of prayer as a young nun.
Powerfully engaging, often heartbreaking, but lit with bursts of humor, "The Spiral Staircase" is an extraordinary history of self.

Title: The Spiral Staircase: My Climb Out of Darkness

The Spiral Staircase: My Climb Out of Darkness