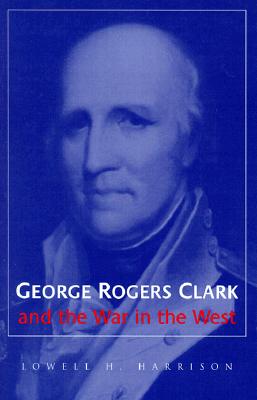 George Rogers Clark and the War in the West

"Much has been written about the famous conflicts and battlegrounds of the East during the American Revolution. Perhaps less familiar, but equally important and exciting, was the war on the western frontier, where Ohio Valley settlers fought for the land they had claimed -- and for their very lives. George Rogers Clark stepped forward to organize the local militias into a united front that would defend the western frontier from Indian attacks. Clark was one of the few people who saw the importance of the West in the war effort as a whole, and he persuaded Virginia's government to lend support to his efforts. As a result Clark was able to cross the Ohio, saving that part of the frontier from further raids. Lowell Harrison captures the excitement of this vital part of American history while giving a complete view of George Rogers Clark's significant achievements. Lowell H. Harrison, is a professor emeritus of history at Western Kentucky University and is the author or co-author of numerous books, including Lincoln of Kentucky, A New History of Kentucky, and Kentucky's Governors."

Title: George Rogers Clark and the War in the West

George Rogers Clark and the War in the West