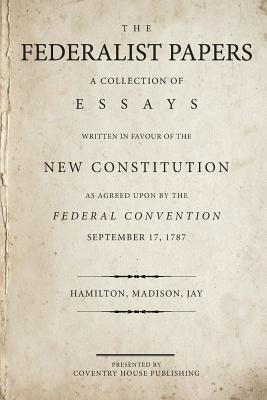 The Federalist Papers: A Collection of Essays Written in Favour of the New Constitution

The Federalist Papers are a collection of eighty-five articles and essays written by Alexander Hamilton, James Madison, and John Jay in favor of ratifying the United States Constitution. First appearing in 1787 as a series of letters to New York newspapers, this collective body of work is widely considered to be among the most important historical collections of all time. Although the authors of The Federalist Papers foremost intended to influence the vote in favor of ratifying the Constitution, in Federalist No. 1 Hamilton explicitly set their debate in broader political terms. "It has been frequently remarked," he wrote, "that it seems to have been reserved to the people of this country, by their conduct and example, to decide the important question, whether societies of men are really capable or not of establishing good government from reflection and choice, or whether they are forever destined to depend for their political constitutions on accident and force."

Among the many highlights of these acclaimed essays is Federalist No. 10, in which Madison discusses the means of preventing rule by majority faction and advocates for a large, commercial republic. This is generally regarded as the most important of the eighty-five essays from a philosophical perspective, and it is complemented by Federalist No. 14, in which Madison takes the measure of the United States, declares it appropriate for an extended republic, and concludes with a memorable defense of the Constitution. In Federalist No. 70, Hamilton advocates for a one-man chief executive, and in Federalist No. 78 he persuasively lays the groundwork for the doctrine of judicial review by federal courts.

Though centuries old, these timeless essays remain the benchmark of American political philosophy. As eloquently stated by famed historian Richard B. Morris, The Federalist Papers serve as an "incomparable exposition of the Constitution, a classic in political science unsurpassed in both breadth and depth by the product of any later American writer."

Title: The Federalist Papers: A Collection of Essays Written in Favour of the New Constitution

The Federalist Papers: A Collection of Essays Written in Favour of the New Constitution