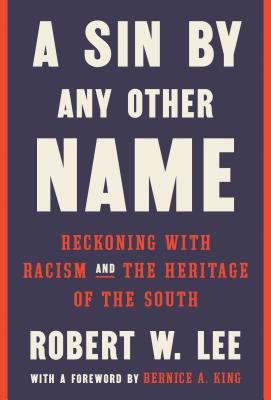 A Sin by Any Other Name: Reckoning with Racism and the Heritage of the South

A descendant of Confederate General Robert E. Lee chronicles his story of growing up with the South's most honored name, and the moments that forced him to confront the privilege, racism, and subversion of human dignity that came with it.

With a foreword by Rev. Dr. Bernice A. King. The Reverend Robert W. Lee was a little-known pastor at a small church in North Carolina until the Charlottesville protests, when he went public with his denunciation of white supremacy in a captivating speech at the MTV Video Music Awards. Support poured in from around the country, but so did threats of violence from people who opposed the Reverend's message. Weeks later, Lee was ousted from his church. In this riveting memoir, he narrates what it was like growing up as a Lee in the South, an experience that was colored by the world of the white Christian majority. He describes the widespread nostalgia for the Lost Cause and his gradual awakening to the unspoken assumptions of white supremacy which had, almost without him knowing it, distorted his values and even his Christian faith. In particular, Lee examines how many white Christians continue to be complicit in a culture of racism and injustice, and how after losing his pulpit, he was welcomed into a growing movement of activists all across the South who are charting a new course for the region. A Sin by Any Other Name is a love letter to the South, from the South, by a Lee--and an unforgettable call for change and renewal.

Title: A Sin by Any Other Name: Reckoning with Racism and the Heritage of the South

A Sin by Any Other Name: Reckoning with Racism and the Heritage of the South