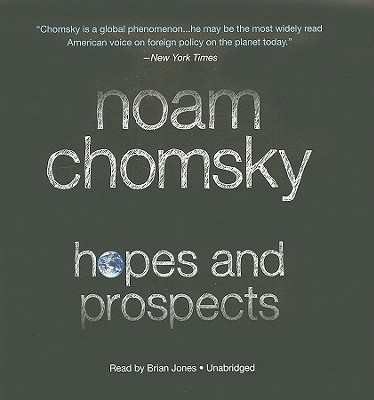 The Americas, both North and South, have been in motion with elections and political shifts that NIn this urgent new book, Noam Chomsky surveys the dangers and prospects of our early twenty-first century. Exploring challenges such as the growing gap between North and South, American exceptionalism (including under President Barack Obama), the fiascos of Iraq and Afghanistan, the U.S.-Israeli assault on Gaza, and the recent financial bailouts, he also sees hope for the future and a way to move forward--in the democratic wave in Latin America and in the global solidarity movements that suggest "real progress toward freedom and justice."

Hopes and Prospects is essential reading for anyone who is concerned about the primary challenges still facing the human race. "This is a classic Chomsky work: a bonfire of myths and lies, sophistries and delusions. Noam Chomsky is an enduring inspiration all over the world--to millions, I suspect--for the simple reason that he is a truth-teller on an epic scale. I salute him." --John Pilger "In dissecting the rhetoric and logic of American empire and class domination, at home and abroad, Chomsky continues a longstanding and crucial work of elucidation and activism...the writing remains unswervingly rational and principled throughout, and lends bracing impetus to the real alternatives before us." --Publisher's Weekly "Chomsky's commentary is razor sharp and offers a compendium of facts that make a well-supported--and undoubtedly controversial--claim of the incongruity between US actions and the democratic ideals it professes....A valuable resource for both academics and everyday concerned citizens." -- ForeWord Professor emeritus at the MIT, Noam Chomsky is one of the foremost critics of U.S. foreign policy in the world. He has published numerous groundbreaking books, articles, and essays on global politics, history, and linguistics. Among his recent books are the New York Times bestsellers Hegemony or Survival and Failed States.