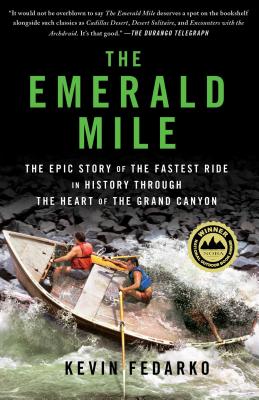 The Emerald Mile: The Epic Story of the Fastest Ride in History Through the Heart of the Grand Canyon

From one of Outside magazine's "Literary All-Stars" comes the thrilling true tale of the fastest boat ride ever, down the entire length of the Colorado River and through the Grand Canyon, during the legendary flood of 1983.

In the spring of 1983, massive flooding along the length of the Colorado River confronted a team of engineers at the Glen Canyon Dam with an unprecedented emergency that may have resulted in the most catastrophic dam failure in history. In the midst of this crisis, the decision to launch a small wooden dory named "The Emerald Mile" at the head of the Grand Canyon, just fifteen miles downstream from the Glen Canyon Dam, seemed not just odd, but downright suicidal. The Emerald Mile, at one time slated to be destroyed, was rescued and brought back to life by Kenton Grua, the man at the oars, who intended to use this flood as a kind of hydraulic sling-shot. The goal was to nail the all-time record for the fastest boat ever propelled--by oar, by motor, or by the grace of God himself--down the entire length of the Colorado River from Lee's Ferry to Lake Mead. Did he survive? Just barely. Now, this remarkable, epic feat unfolds here, in The Emerald Mile.

Title: The Emerald Mile: The Epic Story of the Fastest Ride in History Through the Heart of the Grand Canyon

The Emerald Mile: The Epic Story of the Fastest Ride in History Through the Heart of the Grand Canyon