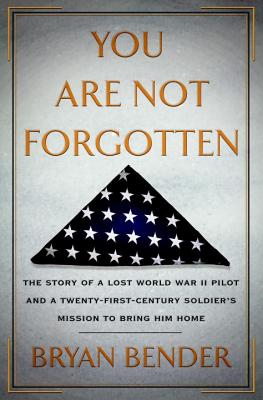 You Are Not Forgotten: The Story of a Lost World War II Pilot and a Twenty-First-Century Soldier's Mission to Bring Him Home

An inspiring and epic tale of loss and redemption about two American servicemen: a Marine Corps pilot who was shot down in WWII and the modern-day soldier determined to bring home his remains six decades later
Major George Eyster V comes from a long line of military officers, dating back to the Revolutionary War. Army service was George's family legacy, but his tour of duty in Iraq left him disillusioned and questioning. He was making plans to end his army career but was offered a posting to J-PAC, an elite division armed with the latest detection and forensic technology. J-PAC's sole mission is to fulfill a solemn promise at the heart of the military code: bring all fallen soldiers home to the country for which they gave their lives.
In 1944 Captain Ryan McCown, a dashing young Marine aviator assigned to the "USS Nassau, " was shot down over the jungles of Papua, New Guinea. McCown's diaries and letters home to his family and fiancee provide a moving, powerful portrait of the fears and costs of a very different war and underscore the pathos of the ultimate cost of duty.
Eyster's mission with J-PAC eventually took him and his team deep into the sweltering interior of New Guinea in search of McCown's remains. It would be a fraught mission, complete with tropical diseases and black magic, at the end of which Eyster would not only repatriate a fallen veteran and fulfill a promise to deliver him to his loved ones but would also uncover something lost in himself-a sense of purpose in a promise between soldiers that is still worth fighting for.

Title: You Are Not Forgotten: The Story of a Lost World War II Pilot and a Twenty-First-Century Soldier's Mission to Bring Him Home

You Are Not Forgotten: The Story of a Lost World War II Pilot and a Twenty-First-Century Soldier's Mission to Bring Him Home