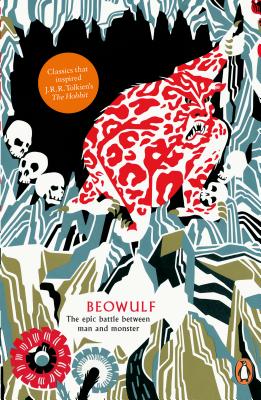 Beowulf (Legends from the Ancient North)

Legends from the Ancient North: Five classics of Norse literature that inspired J. R. R. Tolkien's epic vision in The Hobbit and The Lord of the Rings

Legendary fantasy writer J. R. R. Tolkien spent much of his life studying, translating, and teaching the ancient tales of northern Europe at Oxford and drew on them for his own writing. These epic stories, with their wizards and knights, dragons and trolls, cursed rings and magic swords, are as fascinating today as they were thousands of year ago. Reading them brings us as close as we will ever get to the magical worlds of the Vikings and the origins of their twentieth-century counterpart: Tolkien's Middle Earth.

Beowulf tells the epic story of the heroic Beowulf and his battles, first against the monster Grendel, who laid waste to the castle of the Danish king Hrothgar, then with Grendel's avenging mother, and finally with a dragon that threatens to devastate his homeland. For more than seventy years, Penguin has been the leading publisher of classic literature in the English-speaking world. With more than 1,700 titles, Penguin Classics represents a global bookshelf of the best works throughout history and across genres and disciplines. Readers trust the series to provide authoritative texts enhanced by introductions and notes by distinguished scholars and contemporary authors, as well as up-to-date translations by award-winning translators.

Beowulf (Legends from the Ancient North)